This week’s episode of Reel Time began as a vague notion that as a writer I should know my potential reader. ‘Target your audience’ as a catch phrase, has its roots in economic reasoning.  Not one of my strong points.

I was vaguely pondering how I was supposed to know the whims of millions, possibly even billions of potential readers, when I found myself over thinking the highly stimulating verb. 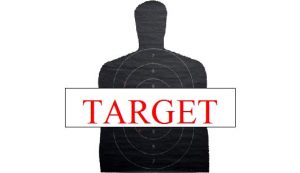 At the time, and for no apparent reason (that I am willing to share), I had been poking around my dress-ups. Then before I knew what was up and what was floppy, I was brandishing a phallic symbol whilst strutting bow-legged and sideways through the scrub, wearing my over-the-knee boots and channelling ‘Annie, Go Get Your Gun’.

Midway through my little romp I had swapped my utensil for a compound bow and uploaded visions (ie. transvisioning – there’s that word again– remember it now) from a completely different setting.  Suzanne Collin’s Hunger Games came to mind, as did Tolkien’s dishy elves.

That’s when it hit me…

An audience sets the targets …

… Because the eternal story will always have an audience.

Jasmine Neutron Star is the first book of the Star Ways Chronicles.  It is a novel most suitable for young adult and teenager readers of speculative, fantasy / science fiction, urban fantasy.  It is a humorous account of Jasmine’s first adventure into the world of light – Quanta.  She is a spirem – a new kind of superhero – and perfect for the sphere of Terra.