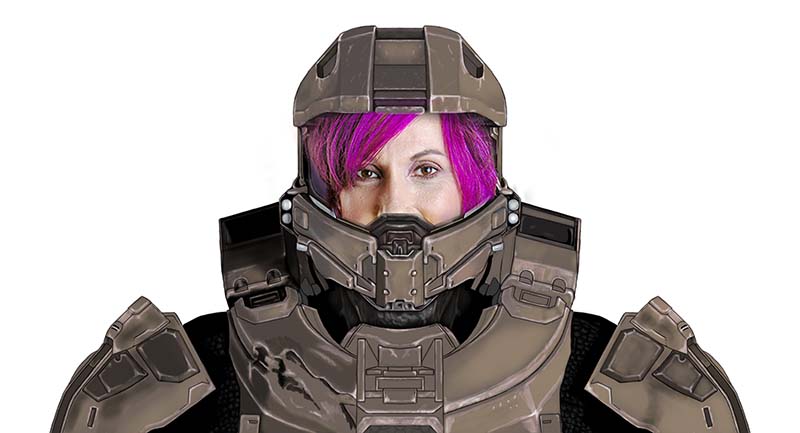 As if it wasn’t enough to master (chief) the console – hit the right buttons, fight giant rats carrying guns, lose my way from one dead end into another, bump into random coffee machines – not to mention that left brain/ right brain manoeuvrability – or lack thereof – and what’s with that stale socks smell!   How was I to know there is a whole set of ‘in house’ rules that go with the gaming ethos?

born to the human race!!!

I broke every rule – every single one!

I haven’t had that much fun since my school days.  But I am paying for it now. I have lost my Halo.

In this week’s episode of Reel Time I get told.  If I want to continue with my byte lights crusades then I have to tone down the mega wattage and behave.  If I want to be allowed back in the gaming room I had to agree and come quietly.  I will be allowed to play something, simple.  My only request was that the new game was not a car race.  My request was met with a lowered brow and an eye glint.  I am worried – very worried.

Did you know that Halo 5 is being released soon? Totally – right!

Apparently – it appears as if – Master Chief gets ‘done over’ in the next Halo makeover!  What – but he’s the main character – you can’t take him away from us – WE HAVE BONDED!

Who do these writers think they are – manipulating characters and plots as if they have a right?

Umm…I had better give that question a bit more thought …


Jasmine Neutron Star is the first book of the Star Ways Chronicles.  It is a novel most suitable for young adult and teenager readers of speculative, fantasy / science fiction, urban fantasy.  It is a humorous account of Jasmine’s first adventure into the world of light – Quanta.  She is a spirem – a new kind of superhero – and perfect for the sphere of Terra.